The Smarter Learning Guide is reader-supported. When you buy through links on our site we may earn an affiliate commission. Read more. 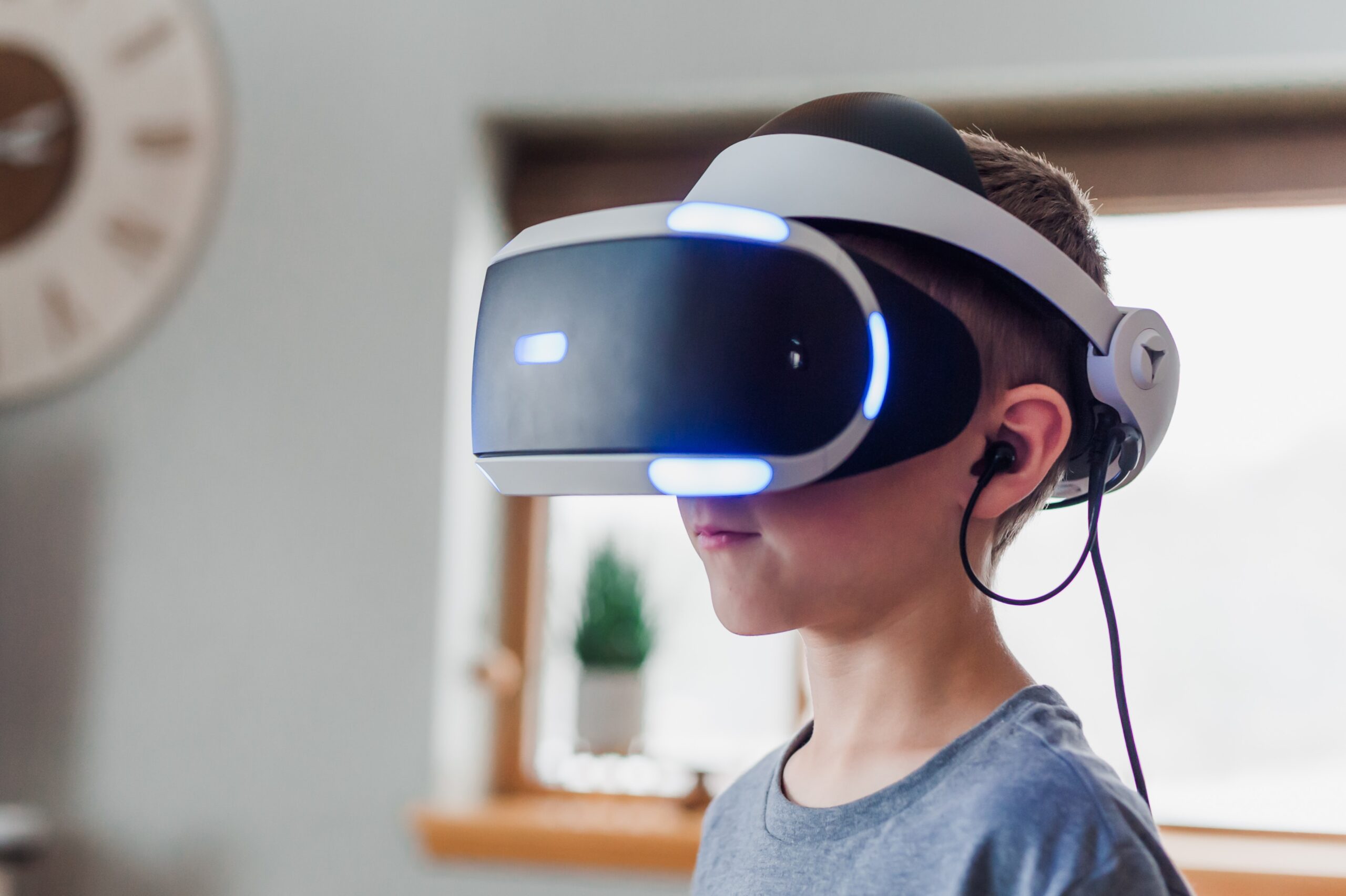 Virtual Reality was, for decades, the holy grail of video games and computers. There were movies and books about how fantastic VR learning would be and how it would reshape our world.

But when Virtual Reality arrived, well, we found that we really didn’t know what to do with it.

Gamers found that high-action in VR just made people nauseous, and programmers learned it didn’t really add anything to their skills. But thankfully, parents are starting to find out that virtual reality in online education can be a great addition to their children’s learning toolbox. The ability to transport a learner into a virtual world and see/experience things most of us will never get a chance to is not to be missed.

In this article, we recommend four VR games that we think can entertain and broaden your child’s minds- or even your own!

What’s it about: Take a VR field trip through the solar system and experience the wonder of the cosmos!
What hardware do I need? Virtual Reality is supported on: Oculus Quest, Oculus Rift, Microsoft Mixed Reality Sets, HTC Vive, Vive Cosmos, and on Google Cardboard VR (app store). Also available as a non-virtual reality game on the PC.
For: All Ages
Price: $9.99
Topic: Science and Astronomy

This one is perfect for the budding astronomer. The game takes players on a guided tour through the solar system, with plenty of facts about each planet and body. But there’s more to learning than just facts and figures.

Titans of Space Plus VR takes you on a VR learning journey through the solar system. Users can experience space in three dimensions, letting them move around and get closer (or further) as they like with pretty detailed 3D rendered planets and stars. Users can choose if they want to take a long journey, or a short one (great for younger learners), to take the tour seated or standing (careful not to bump into a wall-er, we mean Jupiter!) and to set it so that it’s motion sensitive.

After setting everything up, the program tracks head motion that really makes it feel like you’re in space. Wherever you look, so does the camera, which is pretty cool.

The planets and celestial bodies are pretty detailed and accurate, the accompanying music is a nice touch and the information you get is spot on and up to date. While the controls can take some getting used to, we really feel that this game gives you a great sense of scale, letting you really feel how huge space can be while still letting you get mind-blowingly up close and personal with the celestial bodies.

We don’t think you’ll get a much better space-faring experience for $9.99. Plus, the Zero Gravity mode is a lot of fun!

This is a great VR learning game for the aspiring traveler, and is just as educational as you might expect given that it has the National Geographic brand attached to it. It’s also a beautifully made and very immersive experience.

The player takes the role of a National Geographic explorer tasked with exploring two locations (so far). The first area to explore is the antarctic, where the player can learn about the flora and fauna of this icy environment. The second is high up in the mountains of Peru, where kids can discover and explore the ruins of the ancient Incan city of Machu Pichu and learn about the history and culture of that ancient city and the story of it’s original discovery.

This isn’t a case of “same game, different setting” either, the two halves of the game are very different although both are quite good. The exploration into Antarctica is a bit more interactive and physical with virtual kayaking and ice climbing, while the Machu Picchu experience is more educational and laid back with a greater emphasis on the location and discovery, as well as on taking fantastic virtual photos.

You can see that a lot of effort and a lot of love went into this game and it makes for a great VR learning experience. The graphics, musical score, the voice over from your guides, tracking, and true to life scale of the locations are all top notch, and show that the creators really went above and beyond to make this game into something really special. Not too surprising, given that it was produced by National Geographic themselves.

While the experience and graphics are exceptional, one thing to note is that the game is not particularly long, most users report finishing it in about an hour or two or so if they really push themselves to finish, although for the price this is not unexpected. The company that develops the game does, however, periodically release additional content with new locations.

For $9.99 National Geographic Explore VR is a fantastic way to explore the world from the comfort of your living room!

What’s it about: Explore the ocean and learn about its wildlife in this virtual aquatic safari adventure.
What hardware do I need? This game is supported on: Oculus Rift, HTC Vive, Windows Mixed Reality and Valve Index
For: All Ages (although very young children might get scared of some animals)
Price: $9.99
Topic: Biology and Ecology

If you’ve ever wanted to swim with dolphins, tour the coral reefs, and learn all about the wondrous creatures that call the oceans home all from your living room then Ocean Rift might be just the VR adventure you were waiting for.

Created to be a virtual reality aquatic safari, users are immersed in a vivid underwater wonderland where they are free to explore and interact with an assortment of underwater wildlife, such as dolphins, sharks, whales, sea lions and even a dinosaur or two.

The attention to detail here in this game is truly amazing. The animals all move and behave very naturally. Fish swim in schools, moving gracefully through the water. Dolphins and sealions play around just as they do in real life. You really do feel like you’re in the ocean, interacting with real sea life. The animals are depicted in a photo realistic style, which means that the sharks, eels and squid look just like they do in real life and can even ‘eat’ you!

You aren’t restricted to just looking at these animals either- special ‘education points’ will give players a rundown on animals and plants that they encounter, which we think makes it a great supplement to biology and ecology lesson plans.

The gameplay itself is very forgiving and an excellent, non-intimidating choice for VR beginners. Easy to control and move around in, Ocean Rift forgoes the fast fluid movement of more advanced games in order to make things simpler for players and prevent nausea. The downside, however, is that it rarely feels like you’re really swimming.

Overall, Ocean Rift is a great way to teach your kids about the wonders of the ocean and a fantastic experience for anyone who wants to be the next Jacques Cousteau without ever leaving dry land.

What’s it about: Build crazy machines to solve elaborate puzzles in this engineering and physics game.
What hardware do I need? This game is supported on: Oculus Rift, HTC Vive, Windows Mixed Reality and Valve Index
For: All Ages
Price: $14.99
Topic: Physics and Engineering

If your kids are fans of puzzle solving and love building wacky devices that bump, launch, spin and twist, chances are they’ll love Gadgeteer. A combination physics-puzzle and engineering game, Gadgeteer challenges the player to build machines to create wild chain reactions in order to solve some pretty elaborate puzzles.

The game has two modes, The Puzzle Campaign mode and the Sandbox mode. The Puzzle Campaign Mode consists of 60 fun puzzles that start off easy and quickly ramp up the difficulty and challenge. Set inside an apartment, each level gives users a task to solve with a certain number of parts and have to build a machine that can do things like move a ball to a target or launch something into the air. As for the type of machine you have to build, well, the name of the game here is whatever gets the job done and we think that philosophy is an excellent way to get kids thinking creatively and logically.

The sandbox mode is more of a free form construction toy- the player is given unlimited access to all 50+ parts the game has to offer and can use them to build whatever they like! These can range from elaborate dominoes set-ups, to wacky Rube Goldberg devices, to a fully functional pinball machine.

The controls for the game are simple but work well- you have 4 basic tools (grab, clone, freeze and delete) on your dominant hand’s controller. Moving and manipulating objects feels fluid and natural, though actually moving around the apartment is done by ‘grab-and-pull’ style locomotion which is a bit old-fashioned but still workable.

The game’s physics engine is very good and extremely realistic. Things whiz and bang as they should in real life, giving kids a pretty true to life engineering experience (without damaging your living room furniture) and can slide easily into a lesson plan on physics and math.

The realism can be a double-edged sword, however, since real life physical laws can be somewhat frustrating – you can build a perfectly designed machine only to have it fail because a marble didn’t land with enough force to trigger a button! But that’s physics for you.

All things considered, Gadgeteer is a great construction tool that can also be used to teach your little scholar about physics and engineering. We really recommend it to anyone who loves to tinker and is hoping to share that love with their kids.

Jennifer Keenes is a writer and a new mom living in Florida. She studied education and, prior to becoming a freelance writer, worked as a substitute teacher at the elementary and middle school level. She is a big fan of the beach, working out and homeschooling her two daughters.

The Smarter Learning Guide is dedicated to researching, reviewing and finding the best educational products and services and presenting them to you in an easy-to-understand way.

Any cookies that may not be particularly necessary for the website to function and is used specifically to collect user personal data via analytics, ads, other embedded contents are termed as non-necessary cookies. It is mandatory to procure user consent prior to running these cookies on your website.